Designing a set of features on Spotify to personalize listening and enhance the social experience. 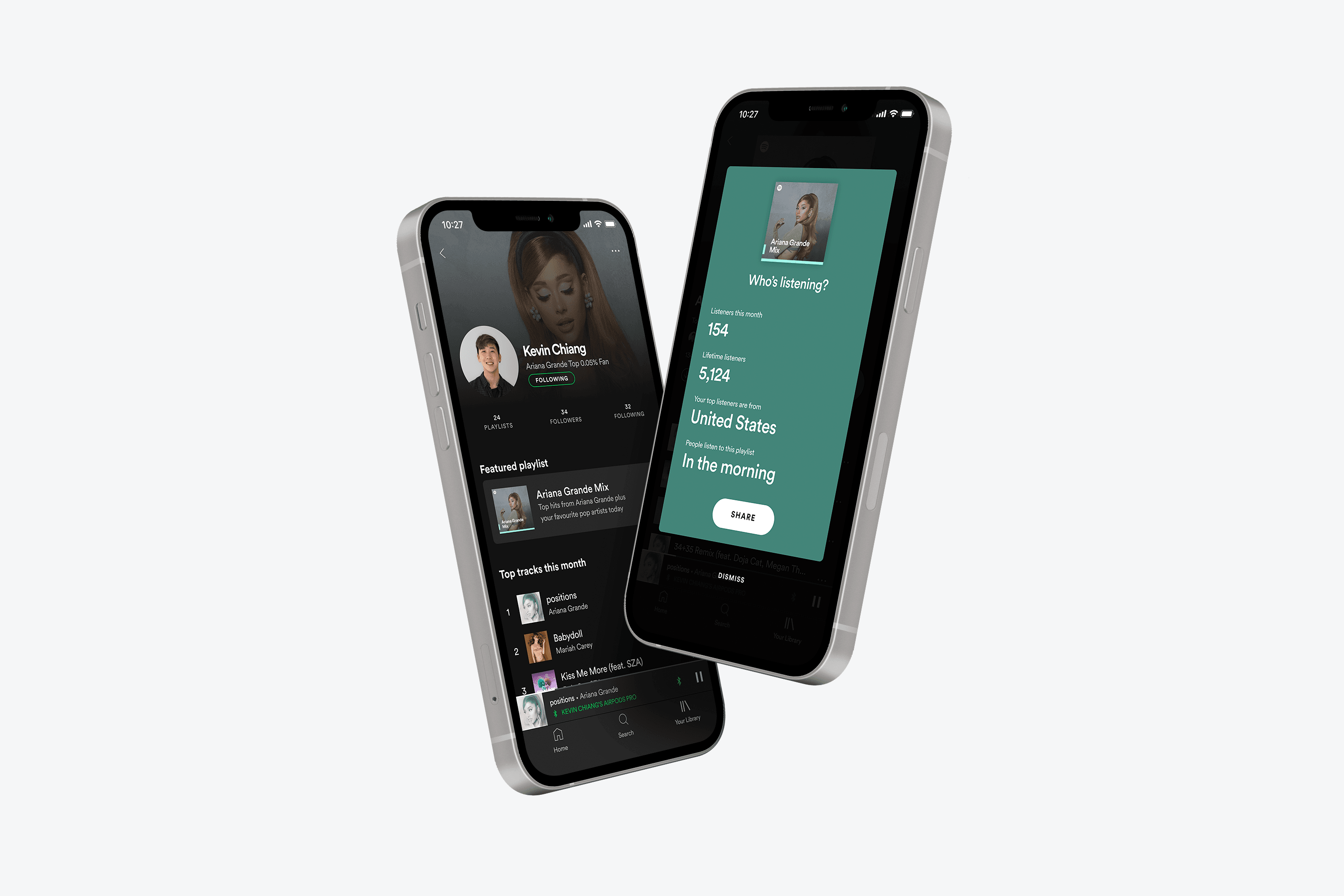 Two years ago, I took a course called Cultural Production of Popular Music and I enjoyed learning about the relationship between pop music and how we consume it. That's why I wanted to conduct a case study to analyze how Spotify users interact with music and with each other. I conducted user research over the past two weeks to redesign Spotify's profile page.

Throughout this case study, I will explore how people consume and interact with music, including user research and interviews. Next, I'll describe how my research findings helped me design interactive features in Spotify that enable users to express themselves and facilitate social interaction through a new sharing feature.

Music as a form of escapism is reflected in popular depictions of people enjoying music, like these advertisements from Apple

In this ad for AirPods Pro, the woman walks through a crowded city, switching between noise cancellation and transparency mode. When she turns on noise cancellation, the city turns into a neon covered streets. There she is able to break out in dance and express her creativity. 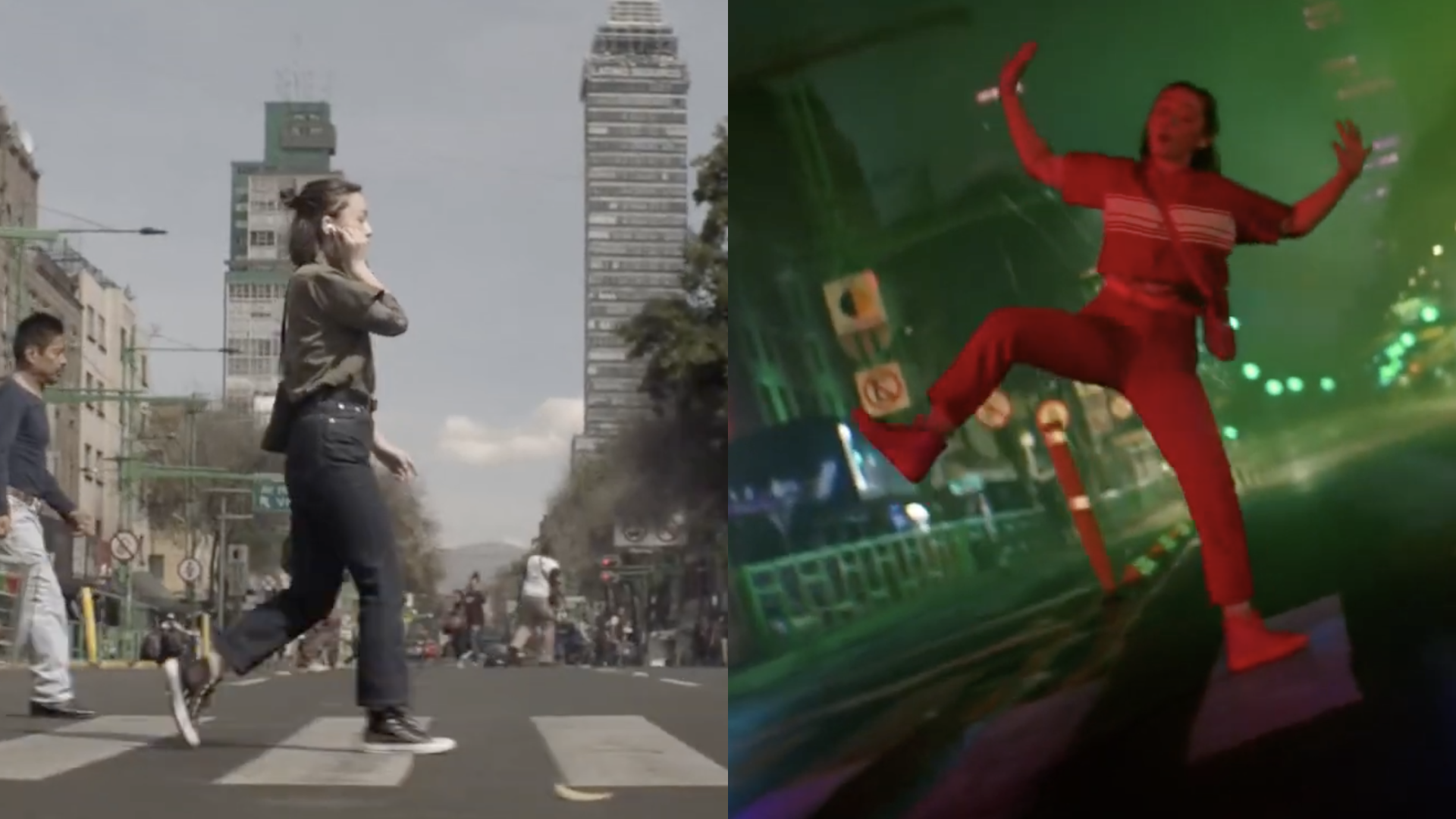 In this HomePod ad, FKA Twigs plays a corporate drone temporarily escaping in Siri suggested music. It's a story of using music as expression and being able to break out in your own space. 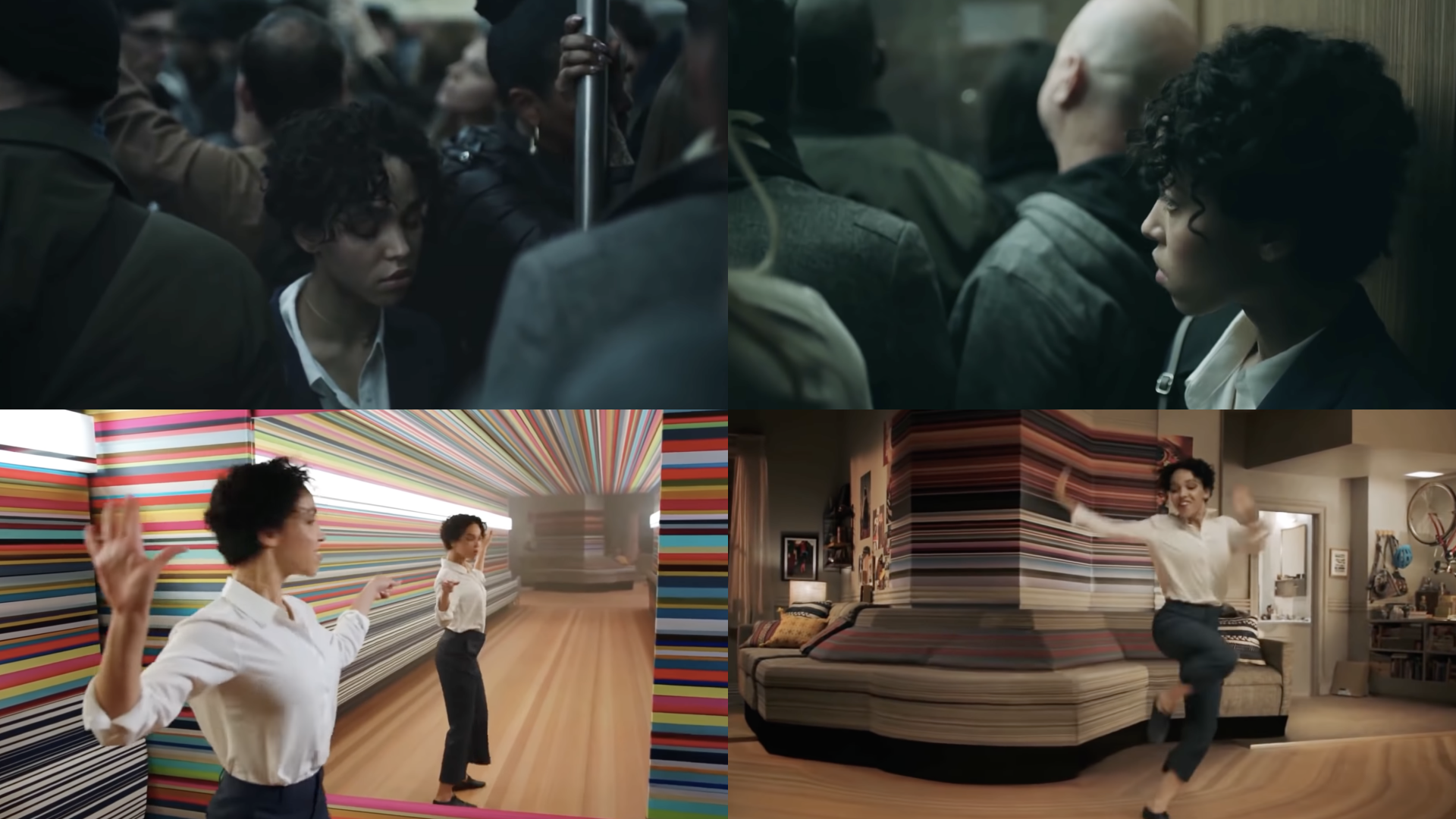 So how do people actually consume, share and enjoy music? To find the answers, I conducted a survey with 87 respondents and interviews with seven people. The target group was exclusively Spotify users. Here are some of my findings.

Sharing music is an integral part of the experience.

Sharing music with friends is an integral part of listening to music, with 95% of respondents saying they do so. Several users have expressed frustration with Spotify's sharing feature, because the functionality is buried in a submenu that requires extra scrolling.

Playlists are a form of personal expression.

The age of streaming has led to a decline in physical record sales, so playlists are used as a medium for individuals to express themselves. Users often name their playlists and feel attached to them.

"Playlists are personal for me, they usually capture a specific mood or event. I have playlists that remind me of the music festivals I went to and some for specific seasons." — Interview Participant

Users don't find the Spotify social features to be very comprehensive and they don't provide much value to the service. On the mobile app, it's hard to find friends and following them doesn't do much. As a result, many users don't bother to use the social features.

"The most recently played artists is kind of useless. It doesn't tell people what music I like and vice versa." — Interview Participant

I found that there were two main types of users. Productive listeners often share what they're listening to with friends. Passive listeners just use the app for music and nothing else.

Both types of users engage in sharing music with others. It was interesting to see that productive listeners don't consider sharing a social feature. 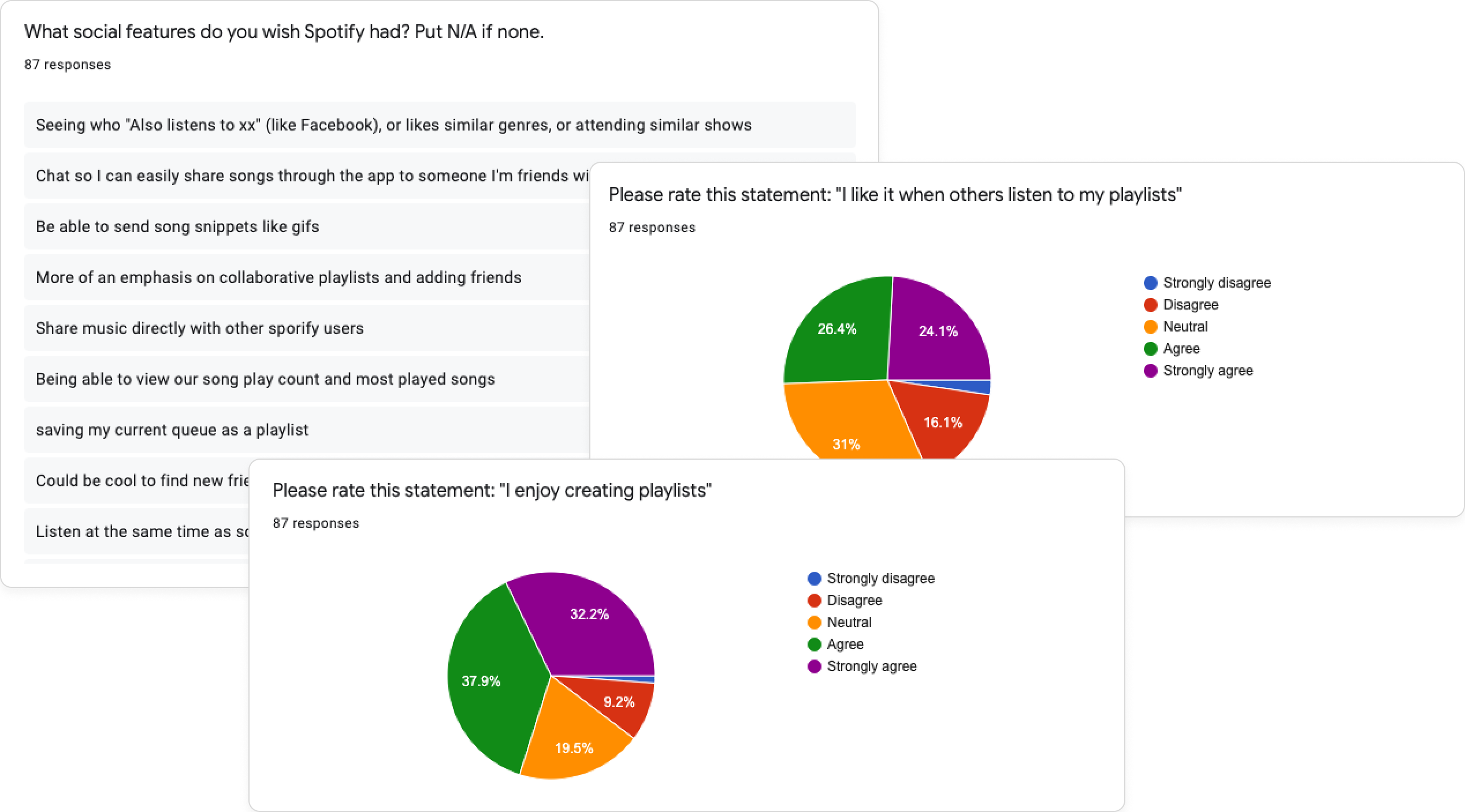 So how do people actually consume, share and enjoy music? To find the answers, I conducted a survey with 87 respondents and interviews with seven people. The target group was exclusively Spotify users. Here are some of my findings.

From my user research and interviews, I created a How Might We statement based on the problems and opportunity spaces that came up.

How might we create a more personalized social experience on Spotify?

Most social media apps have similar profile pages, and that's for good reason. For this page, I wanted to provide useful information to anyone looking at a person's profile. From my user testing, the first layout (shown below) was most preferred. For my first round of ideation, I decided to add three features. 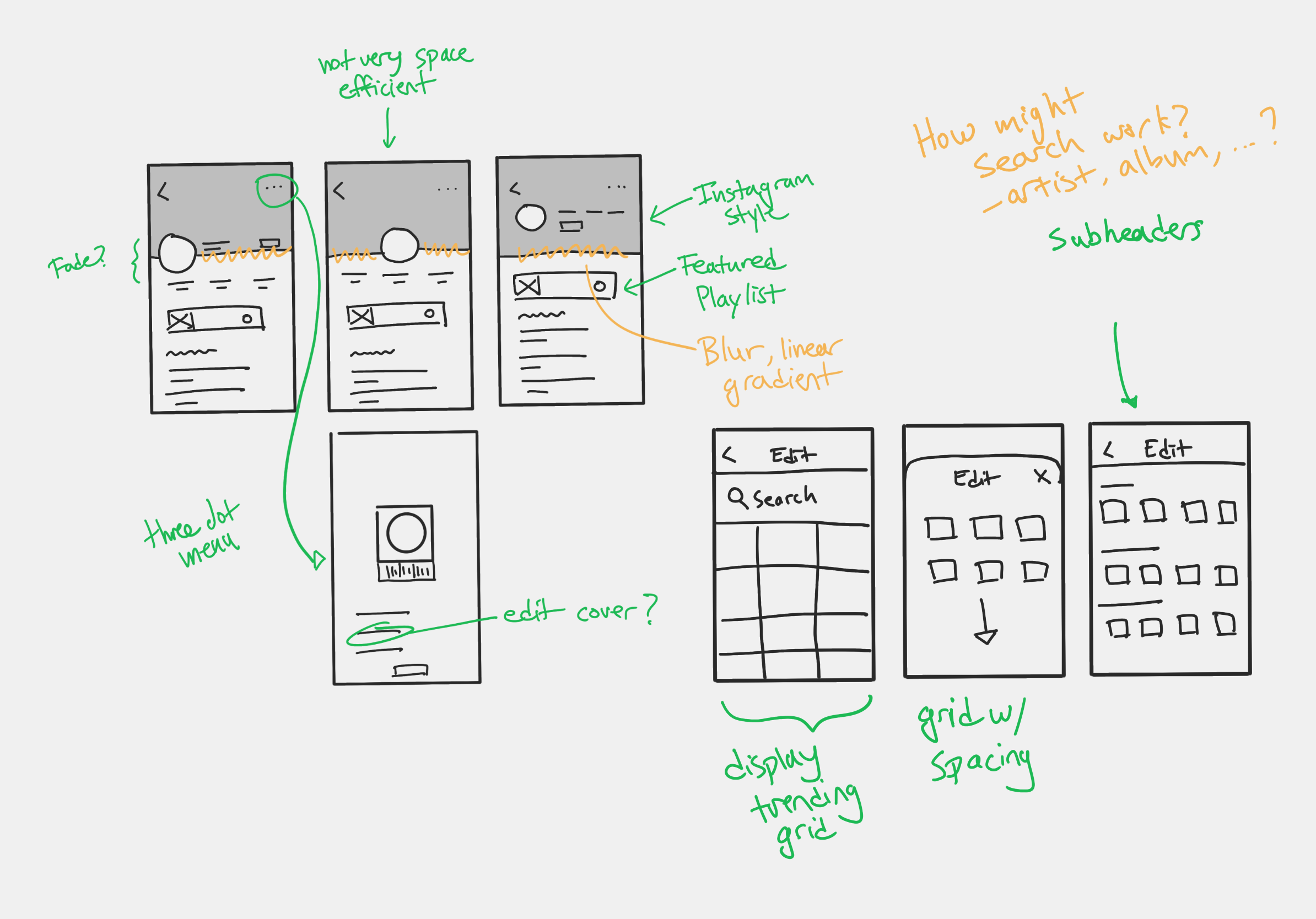 As I built upon the first layout, I considered how sharing could be streamlined. About half of Spotify users look up and add friends. Many users wish it were easier to share music without leaving the app.

I added a feature that lets you share your inbox to solve this problem. Users can send tracks directly to friends' inboxes without leaving the app. 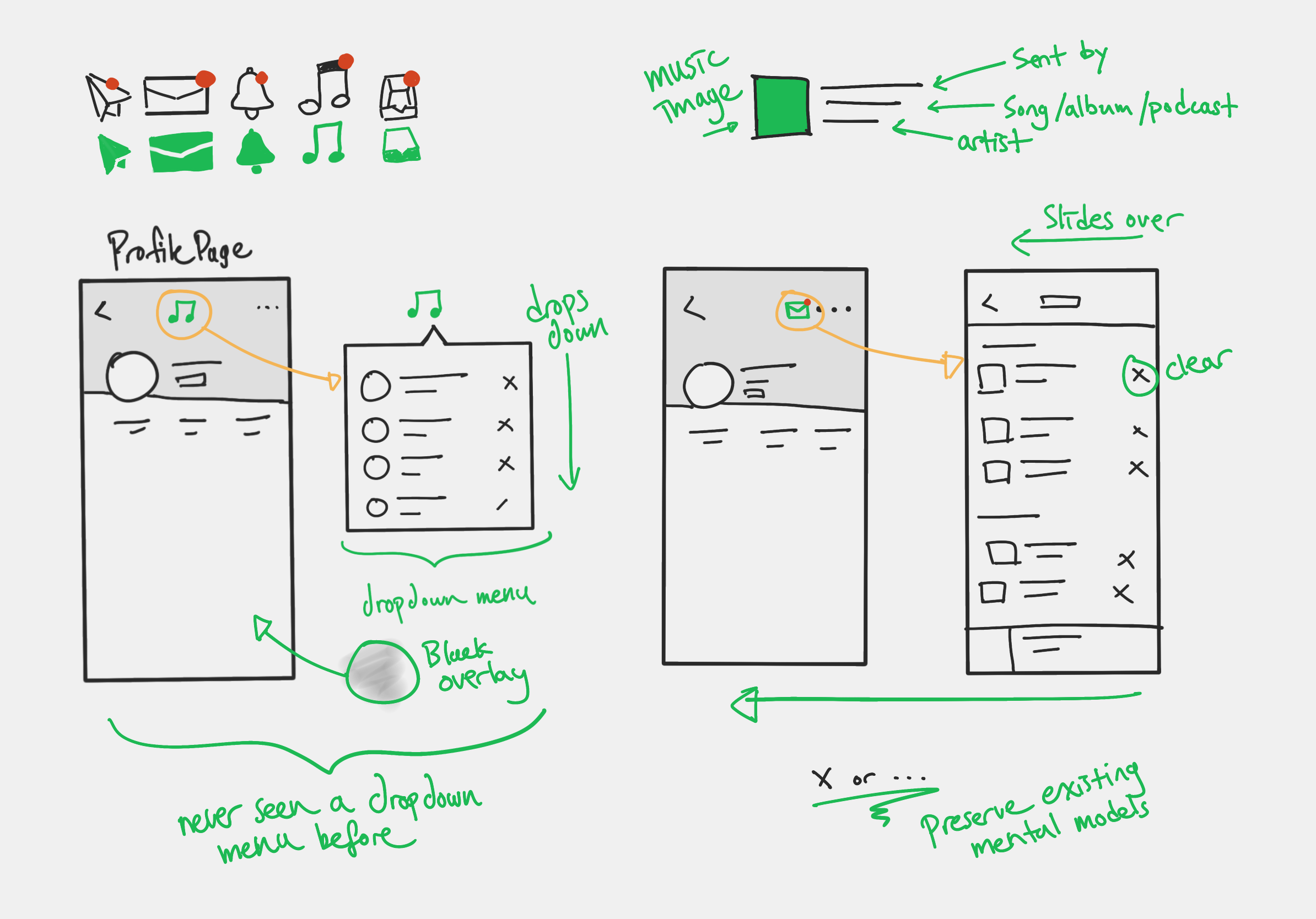 The new profile page builds on the great work Spotify has already done. Users can share their taste in music through a cover page and a playlist of their choice. Also, listeners can share listening statistics through the Top Tracks This Month chart. 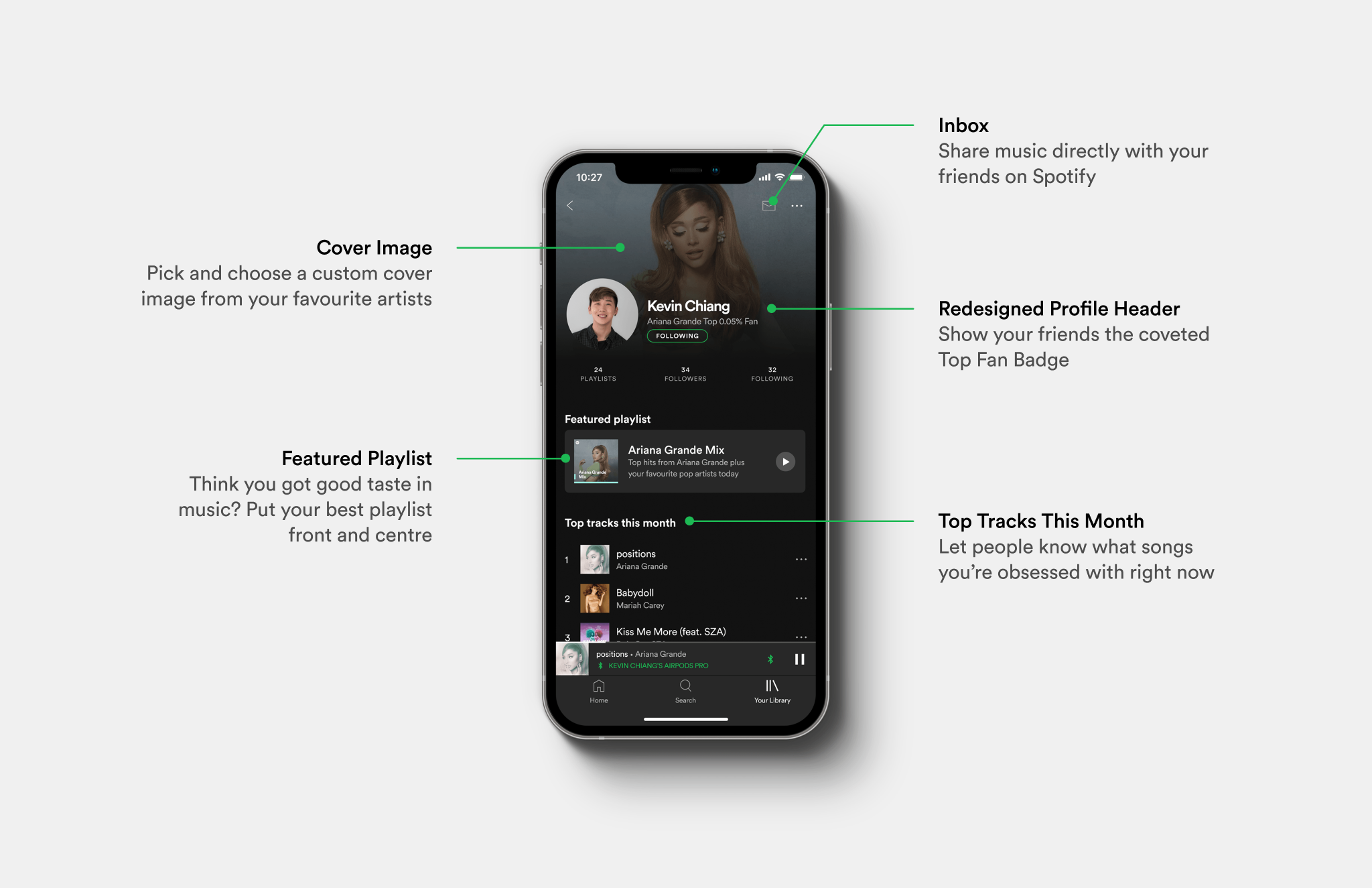 I designed a cover image selector based on images that artists provide. This made sense from a user and business perspective. For users, it's easier make a selection from existing choices. For Spotify, it's an easy way to gain favour with artists by giving them another way to promote themselves. 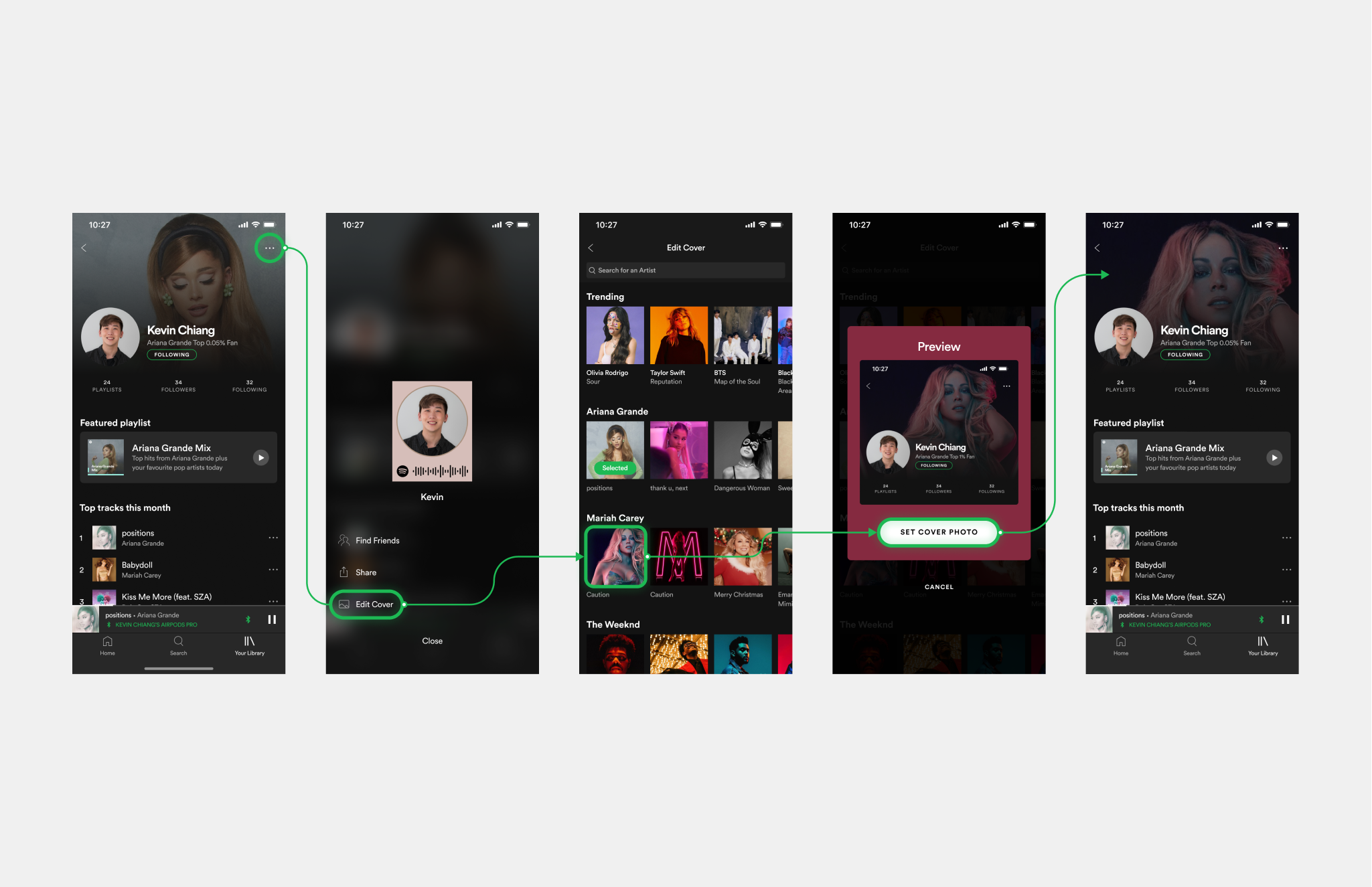 Users can add cover photos to personalize their profile.

Many users were frustrated that the sharing feature was buried in a menu that required an additional scroll to reach. By placing it beside the favourite icon, I made it easier to access. Tap the search bar to instantly pull a list of suggested friends or search for someone. Shared tracks go directly to your inbox on the profile page. 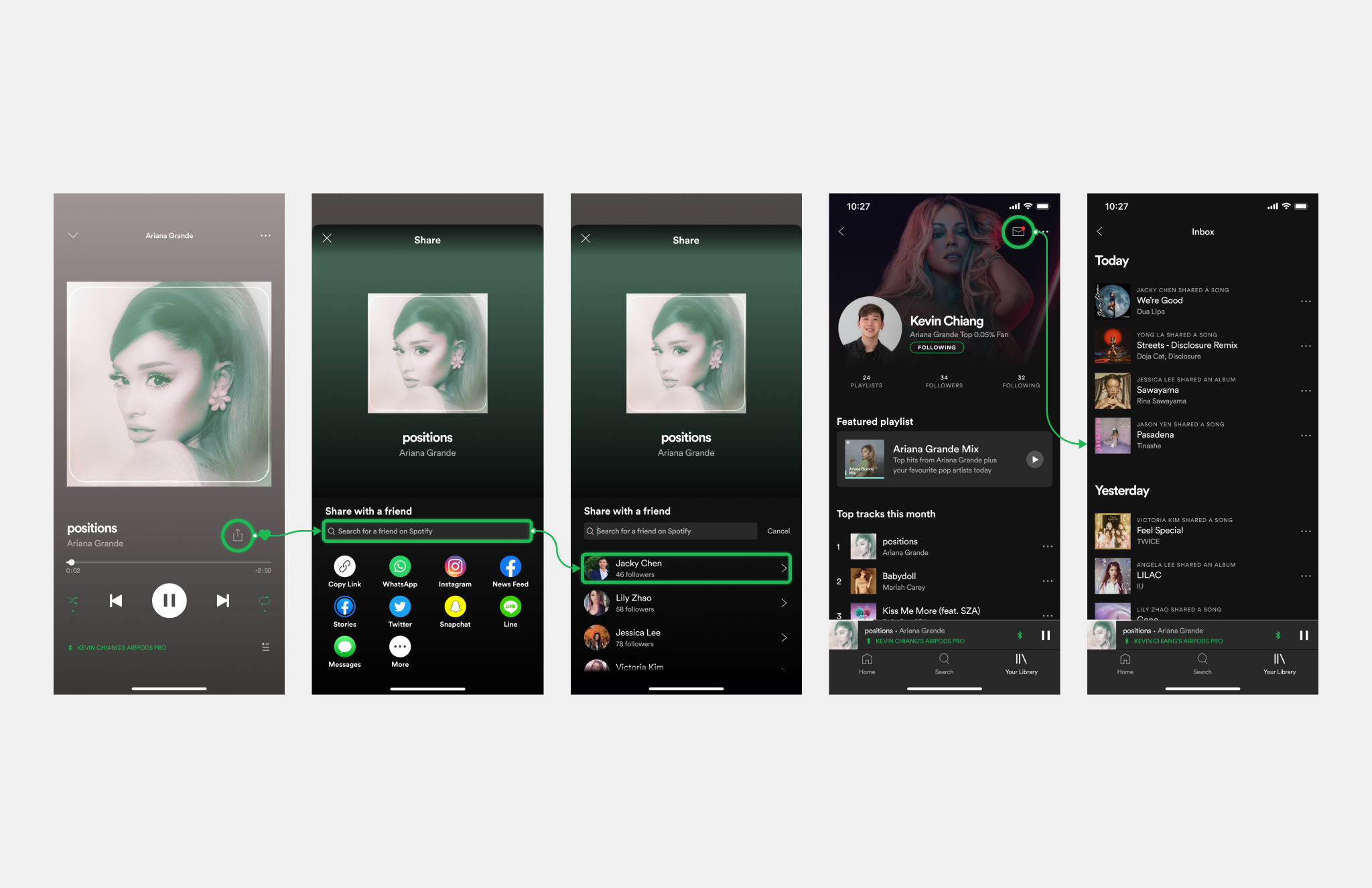